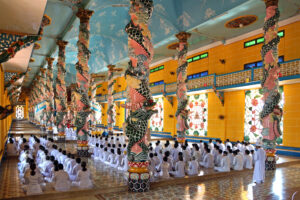 … is not the capital, but after all, the largest city in Vietnam with about 8 million inhabitants.
Ho Chi Minh City is located in the south of Vietnam, immediately adjacent to the Mekong Delta.
Ho Chi Minh City has no real city center and relatively few skyscrapers only compared to other major cities.
Saigon, as Ho Chi Minh City used to be called, stretches far into the surroundings and each single district has its own small center.
And, compared to all the other cities I’ve ever seen, Ho Chi Minh City has the most mopeds.
If there are nine million bicycles in Beijing, according to Katie Melua, then there are at least as many mopeds in Saigon – the tangle and bustle in the streets creates this impression in any case.

If you want to talk about one center in Saigon, I think it’s District 1.
Here you will find the tallest building in the city – the Bitexco Financial Tower – with a height of 256,5 meters.
“Saigon Skydeck” can be found on 49th floor, which offers an amazing and great 360 ° panoramic view on the city.
For a first impression and to be able to have an idea of the size of the city, a visit here is almost mandatory.

There are also many impressive and interesting buildings in District 1, which relate to the French colonial era of Vietnam.
For example, the main post office and the former town hall: both are beautiful buildings that form a magnificent contrast on one hand with the partly communist buildings and on the other hand with the modern houses around.

“The Cafe Apartments” are worth an extended visit.
This, from the facade actually unspectacular former residence building, is located on Nguyen Hue street.
The cafes, restaurants and shops are converted former apartments and spread their own charm. You enter through a corridor, which is lined of parked mopeds on the left and right side, while passing to an elevator. You’ll have to pay for the use of the elevator, as he seems not to belong to the building probably.
We drove to the top floor and took our way downwards the colorful stairwell, hardly leaving any of the shops and cafes. From the top floor you have a nice partial view of the city, for example from Boo Coffee. When you’re done here, you can buy lingerie in the plaza below or have some food or coffee, or, or, or…
The “Cafe Apartments” are definitely one of the insider tips in Ho Chi Minh City.

District 5 gives itself unlike district 1.
In District 1, everything is still structured a little bit. In District 5 you can experience the real life in the streets and enjoy it.
Small workshops where mopeds are repaired are right next to typical and original restaurants, the dishes are washed in the streets, the market offers all you’ll might need or not and the cozy Vietnamese guy just sits there smoking, drinking and playing with his dog or showing his birds.
A visit to District 5 is worth it to experience the cozy Saigon.